Whether you are out at a family birthday party, tailgating at a baseball game, or just hanging out with friends in the backyard, yard games are a popular way to pass the time. These games come in a variety of forms, are easy to learn, and can spark fun bouts of competition among family and friends. One of the most popular games at the moment is ladder toss. If you want to bring an exciting new game to your next family gathering, check out our picks of the five best ladder toss game sets currently on the market.

What Is Ladder Toss?

Ladder toss, also known as ladder golf, is a popular yard game. The “ladders” are simply targets with three rungs, each of which has a different point value. Players hold “bolas”, which are strings of rope with golf balls attached to the ends, and attempt to toss them across the yard to get them to land on one of the rungs to score points.

Why Is Ladder Toss Popular?

Ladder toss is a simple game to learn. The rules, mechanics, and scoring are easy to comprehend for both children and adults. Plus, it does not take a lot of equipment to play, nor does it require a lot of time to set up. It can easily be played anywhere with people of any age. Not to mention the fact that it can spark great competition among family and friends, which makes it a great way to bond and play with one another.

How Do You Play Ladder Toss?

Each of the rungs on the ladder has a different amount of points associated with it. The top rung is worth three points, the middle is worth two, and the bottom is worth one. The goal is to reach 21 points without going over. Your points will remain stationary. For example, if you were at 20 points, you only need one point to win. If in the following round, you are awarded three points, none of those points will count and you will remain at 20 points.

The ladders should be placed roughly 15 feet apart, and players should be tossing roughly five paces away from the ladder. Whether you decide to play in teams or individually, each player should go up and throw all three of their bolas, trying to earn as many points as possible. After both sides have thrown, points are tallied for each team. Only one team is allowed to score per round, and they receive the difference in points between the two teams. For example, if the first team scores six points and the second team scores four points, the first team would receive two total points. The first team to 21 wins!

Adaptations can be made to all of these rules depending on your family, your game play style, the level of the desired difficulty, and a number of other factors. As long as you are having fun, that is all that matters

Where Can You Buy the Best Ladder Toss Game Sets?

To make sure we got an accurate review of the best ladder toss game sets available, we spent a significant amount of time compiling a list of brands. Once we had this list, we went over the features, pros, cons, price, and warranty for each brand in order to determine how beneficial each would be compared to the last. We then reviewed the entire list and came up with a final verdict on the best ladder toss game sets.

Overall Price Range of This Product (and Similar Products) 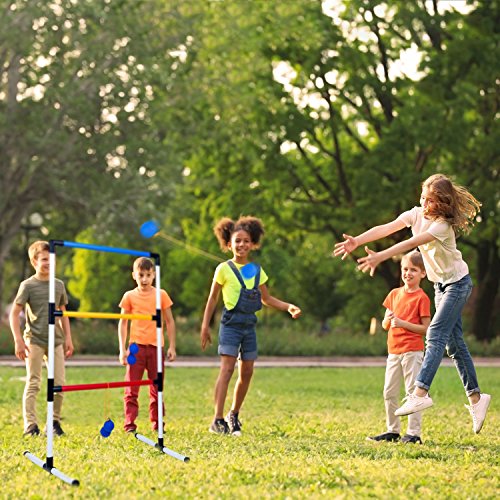 The price of the best ladder toss game sets will vary slightly depending on the brand, what the game set is made of, and where you purchase it. There are also a number of other great ladder toss game sets available on the market, not featured on this list, that may cost a little more or a little less than our estimated price range. 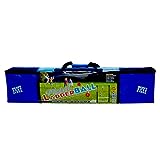 If you are able to invest a bit of money into your lawn games, it is definitely worth checking out the Maranda Enterprises Metal Ladderball Game. This game set comes with two durable ladders and six boas. The ladders can easily come apart for simple storage in its carrying case and has a quick set up time before game use. Plus, this specific game set has been tested and approved for safety by the ASTM, marking this game suitable for anyone ages 8 and up.

This product comes with a 30-day limited warranty. This protects your product from any and all manufacturer defects in both workmanship and materials for the span of 30 days. 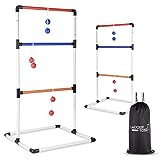 For a slightly more affordable option, check out the Ladder Toss Ball Game Set – Box Shaped Sturdy and Stable Base. This game set has a unique design to keep the ladder steady during play. The bottom of the base is all connected into a large square rather than two parallel lines. Plus, the bolas, themselves, are made with thick rope chosen specifically to prevent tangling while you play and while you store.

Equally impressive is the carrying bag. This bag is designed similarly to a backpack and can snuggly fit all the pieces of this game set inside. Plus, this bag includes a score tracker, making it easier to keep track of your game while you play it.

Unfortunately, this product does not come with any type of warranty, but it does come with a satisfaction guarantee. This means that if you get it and are not satisfied with the product, you can get a full refund. Depending on where you purchase it from, you may be able to get some sort of coverage on the product, but that will probably come at an additional cost. 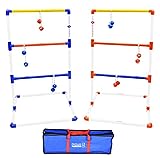 The GoSports Premium Ladder Toss Outdoor Game Set is definitely the one to beat. This game set has been the #1 selling ladder toss game set on Amazon for quite some time and has given people consistent results. The ladders have a square base which provides them with extra stability during game play. Plus, the bolas are constructed out of real golf balls. This means that they will not easily break, chip, or shatter as plastic ones will. They are also made out of thick rope specifically designed to prevent tangling.

This product comes with a lifetime warranty. They have a 100% satisfaction guarantee with a United States based customer support team. If you have any trouble with the product, they will help you resolve the problem or issue with ease. 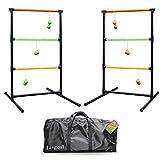 The Juegoal Upgrade Ladder Toss Game Set is a terrific choice for those on a budget. Coming in just under $30, this game set provides you with all the tools you need to play a fun game of ladder toss with your family, including a set of rules on how to play. What is unique about this unit is that the bottom rung of each of the ladders is filled with sand. This sand is used to keep the unit weighed down while outside. By doing this, they have created a stronger and more durable game set than many other competitors on the market.

Unfortunately, this product does not come with any type of warranty, but it does come with a satisfaction guarantee. This means that if you get it and are not satisfied with the product, you can get a full refund. Depending on where you purchase it from, you may be able to get some sort of coverage on the product, but that will probably come at an additional cost. 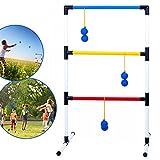 The Ideas in Life One Piece Ladder Ball Game Set is specifically designed for both solo and multi-player games. The ladder is lightweight and quite durable, and it is perfect for playing either indoors or outdoors. This is a great unit for either kids or adults. No age is off-limits.

The one important thing to note about this game set is that it only comes with one ladder and three bolas. This may be okay for adaptive versions or for solo play, but it will not be the right unit for you if you intend to have regular competitions with friends and family. We suggest either purchasing two of these units or investing in one of the other game sets to have the full gaming experience.

Unfortunately, this product does not come with any type of warranty.

With so many game sets available on the market, it can be difficult to determine which is the best. Our overall pick for the best ladder toss game set is the GoSports Premium Ladder Toss Outdoor Game Set. This set has everything you need to have a good time, comes in at a decent price point, and uses real golf balls to make their bolas. Additionally, it comes with a lifetime warranty.