RTIC Vs YETI: Which Cooler Is Better?

RTIC vs YETI is a battle fought at tailgate parties, car camping trips, sand volleyball courts, and at the beach. The contest between these two top cooler brands can only be settled by veteran cooler owners – those who know the importance of keeping food cold when traveling, on day picnics, and during campouts. If you’ve never owned at YETI and don’t know what RTIC even stands for, you might be asking – does it really matter? Aren’t modern coolers all pretty much light years ahead of that old styrofoam-walled Coleman your dad loved? In fact, coolers are leaps and bounds better, but price and features still matter.

This cooler company is a dozen years old, beginning its reign over all other coolers shortly after selling their first ice chest in 2006. YETI has its roots in Austin, TX and was founded because the business owners were underwhelmed with current cooler offerings, and as avid hunters, they knew what they wanted in a good cooler. What they were looking for is also what consumers wanted, because YETI took off like a rocket in sales. The cooler they produced, now in both hard and soft versions, keeps food and drinks ice cold for days. Who wouldn’t want a YETI?

Founded in 2014, also by two brothers, this cooler company decided YETI had a good thing going, so why not make a cooler just as good for less money? This idea proved fruitful, and thus the RTIC vs YETI wars began. The RTIC took the molded cooler concept and came up with the slogan, “A YETI at Half the Price.” YETI noticed this and filed a lawsuit, claiming patent infringement, which was recently settled. As a result of this somewhat auspicious start, RTIC had to cease making identical coolers. There are still several RTIC copycats out there, but RTIC has since redesigned enough to satisfy YETI and the courts.

Where Can You Purchase The RTIC And YETI Coolers?

RTIC has a more exclusive sales territory, and they are available through the company website and on Amazon. YETI is a lot easier to find. Both cooler types can be bought on the used market. Look for RTIC and YETI on Craigslist and eBay.

The company website has the best array of new RTIC coolers. Because of the popularity or RTIC – which rivals YETI in both styling and quality – and because RTIC is a new company, they sometimes run out of products. Check the website for what is available. The price point for RTIC is relatively stable since they were only sold directly until about a year ago. RTIC has recently added Amazon as one of their sellers and is beginning to branch out to brick and mortar stores.

YETI is sold through the company, through Amazon, and through a variety of big box stores like Costco. In addition, YETI is sold at REI where its products are on full display. The range of YETI products is substantial, so checking the website is a good way to see all the coolers they have available by size, color, and style.

​RTIC Vs YETI On The Used Market

Coolers like this last. Undamaged, they work just as well used as new and sometimes people find that their cooler needs change. Customers who’ve bought YETI at significant investment will sometimes sell on Craigslist or eBay. There are many more YETI coolers on the used market than RTIC simply because YETI has been manufacturing coolers eight years longer than RTIC and it takes a while for a product to start hitting the used market.

Which Cooler Is More Affordable?

RTIC is more affordable than YETI, however, YETI is more consistent in quality. So in terms of value, the comparison isn’t always straightforward.

RTIC Vs YETI On Price And Value 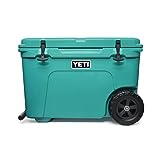 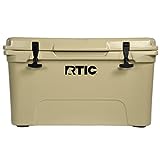 The bottom line is that these are both excellent coolers, but RTIC is a knock-off of very high quality. For this reason, and because RTIC is a much newer product, it doesn’t compare with YETI in the final analysis. The RTIC vs YETI battle isn’t a done deal though because RTIC is a lot less expensive than YETI. When it comes to value, most RTIC products are a better deal, but YETI is more consistent in delivering a flawless product. We will go into more detail on the specific issues that sometimes crop up with RTIC hard coolers.

RTIC Vs YETI: A Comprehensive Review

Both RTIC and YETI produce two cooler lines: soft and hard. The soft coolers are easier to store, maneuver into small spaces, and if not full, this style can be packed more easily into a car. Hard coolers have the advantage of doubling as a stool or table, or even a chair for a kid, and are more durable.

On soft coolers, RTIC has a slight advantage on toughness because they add a 2″ foam lid. Otherwise, both soft coolers in all sizes are of equal quality. Of the smallest soft coolers, the YETI Hopper 20 and RTIC Softpak, ice storage is 3 days and this contest results in a tie. At the mid-sizes of 30 and 40, both RTIC and YETI have the same ice life, 3 and 1/2 to 4 days and 4 days, respectively.

The soft cooler RTIC vs YETI battle yields no victor. Both make great soft-sided coolers with a slight style variation and potential advantage by RTIC. The RTIC soft coolers have a slight size edge, but many consumers may want to make their decision based on look and style since performance is such a close call.

The capacity of RTIC hard-sided coolers is better: ice life is better, and overall, the RTIC vs YETI battle has a clear winner – RTIC. The ice life is the issue, and for long trips where the cooler isn’t being lugged over terrain, RTIC is a clear choice. The YETI ice life is excellent, however, so some buyers may prefer the YETI style and consider other factors like design and warranty.

​RTIC Vs YETI In Toughness, Size, And Style

In terms of how tough these coolers are, both RTIC and YETI are durable and a head-to-head comparison comes out as a tie. In soft and hard coolers, both will hold up well. Size ranges for YETI are five for soft and six for hard coolers. The RTIC sizes are somewhat limited in their hard coolers to just 3. The winner here is YETI. As for style, this is often a personal preference. YETI has many color choices and YETI coolers can even be branded with the names and logos of sports teams. RTIC has only recently upgraded to three color choices for their hard coolers. Winner: YETI.

YETI is an older company and although RTIC has improved its warranty, at times their reliability for refunds and products isn’t on par. YETI has excellent 5-year warranties on roto-molded (hard) coolers and 3-year warranties on soft coolers, and this hasn’t changed since the company hit the market. RTIC has been all over the board, although they started out with a 7-year warranty on roto-molded coolers. Today, their warranty is only one year on both soft and hard coolers.

YETI has an excellent reputation that has lasted from the founding of their company. They have a better track record than RTIC, but in fairness, RTIC is a new company and is still working out its kinks. RTIC vs YETI on customer service is no contest: YETI wins easily.

RTIC is significantly less expensive than YETI, and this is where the comparisons once again turn a corner. Up till now, YETI has won in more areas. The difference can be up to 300% higher on some YETI coolers, so consumers will need to consider these differences when adding up the points on the RTIC vs YETI scorecard.

This is one tough cooler battle. YETI has a great reputation, the better warranty, more reliable customer service, and a terrific range of colors and customized appearances for roto-molded coolers. But where it counts, in ice days, capacity, and price, RTIC holds a clear lead. Our conclusion is that YETI is a more desirable product, and the company has proven itself. YETI is the coolest of coolers for style and reliability.