Supersize Your Tailgate with Giant Jenga

When it comes to group games, Jenga is a classic that’s been going strong for more than 30 years. Giant Jenga is a new take on this long-time favorite that ups the ante and offers a bigger, better payoff when the tower topples. It’s the ideal tailgate game to help bring your group together on game day.

What is Giant Jenga?

​As kids, many of us were familiar with Jenga towers. The premise of the game is simple—remove a wooden block from the base of the Jenga tower, and stack it on top without knocking anything over. As the game goes on, the tower gets taller and more unstable, until the losing player happens to remove the wrong block. Once the tower topples, the game is over.

Giant Jenga is very similar to the classic version, but everything is scaled up to challenge your stacking skills. The 54 pieces in use are generally around eight times larger than those used in traditional Jenga games, and towers can reach over 4 feet in height. The taller the tower you manage to build, the harder the fall at the end.

Setting up a lifesize Jenga game can take time, but the payoff is well worth it. Before getting started, you need to construct a solid tower with which to play. Place a flat base on the ground, then begin stacking Jenga pieces in rows of three. Alternate the direction with each stacking layer. Once every block of the tumble tower has been laid down, you and your friends are ready to play!

​You can purchase a pre-assembled giant Jenga game online, or you can go the DIY route. This is often cheaper and only takes just a few hours out of your day to complete. The only materials you'll need for the project include:

​You’ll also need access to power tools for this build. If you don’t have any on hand, you can borrow from friends and family or see if your local hardware store offers equipment rental. The tools you’ll need include:

​Once you’ve gathered everything that you need, you can get started on construction. Building your giant Jenga game set is a relatively simple process, and as long as you know what you’re doing, it only takes a couple of hours to complete. Here’s how to create your very own giant Jenga board for your next tailgate:

​Using your circular saw, make a frame for your 18X18 base. Cut a 2X4 plank into two 15” and two into 18” pieces. Then, using a Kreg jig and screws, attach the boards into a rectangle frame and mount onto the plywood base.

No matter what the size, Jenga games require 54 separate wooden pieces. You need to cut your remaining 2X4s into sections that measure around 10 ½” each. It’s okay if pieces differ slightly in size--this can add an additional challenge to the game.

​With a DIY giant Jenga set, you don’t have to stick to the traditional look of the game. You can mix things up by decorating each block. Painting pieces in your home team’s colors is a great way to show support before each game.

​The Rules of the Game

​​Giant Jenga is a simple game to follow, even for those who have never played the classic version. There are just a couple rules that all players should be familiar with before starting a game. Here’s the rundown on how to play lifesize Jenga:

​After explaining the rules to everybody, it might be a good idea to set up a quick example game to clarify things. Once everybody knows how to play, it’s time to get the party started!

Get the Whole Gang in on the Fun

​No matter how many people you have attending your tailgate party, giant Jenga is a great way to get everybody pumped for the upcoming game. There’s no limit to the number of people that can play, and the rules are simple enough for both experts and newbies alike to understand. 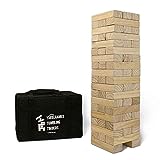 Feature images via I Do Inspiration