How to Make the Perfect Tailgate Whiskey Sour

How to Make the Perfect Tailgate Whiskey Sour

Whiskey sour, Successful tailgate parties follow one set of cooking rules – simple and plentiful is better than tricky and complicated.

The rule applies to beverages, too.

Stick with a few easy and delicious options and lots of them. For most seasoned grillers, this means beer and soda.

A good whiskey sour, however, is the perfect addition to any outdoor tailgate.

Whiskey sours are easy to make, don’t spoil, and simple enough to allow for dozens of separate variations. They can be made individually, or in bulk, and go well on both hot and cold days.

Next, to just opening a can, there’s nothing easier to prepare.

Grab a bottle of bourbon, and let’s get started.

Whiskey Sour – the Easiest Recipe in the World

The basic whiskey sour recipe is this: half whiskey, half sweet and sour. Add ice and a maraschino cherry. You’re good to go.

That’s an actual recipe, but if you looked online, you’d see a much more complicated version, with a few unfamiliar terms.

Simple syrup, bitters, and even egg whites pop up in the more complex versions. Nothing about the dozens upon dozens of recipes you’ll see appears ‘simple.’

Whiskey sours are varied because they’re that simple – because there are infinite ways to make whiskey sweeter.

All you have to do is figure out which way you like best.

It might help, though, to give a brief history.

Why So Many Recipes? Because of Bad Whiskey

Way back in the ‘20s, during the nation’s experiment with prohibition, whiskey was either illegally shipped to the U.S. or made in illegal distilleries. Those unregulated distilleries often made pretty terrible liquor.

Most of the drinks you might encounter at a bar came from this period, and all of them were created for the same reason – illegal liquor is often gross.

Good, high-quality whiskey doesn’t need anything added to it. Cheap whiskey made in someone’s bathtub sure does. The recipes survived after prohibition was lifted, and you’ve surely heard some of the names – Old Fashioned, Sidecar, Highball, and so forth.

We’ve collected the best recipes for tailgates, and all the prep instruction you’ll need.

Just remember – your recipe is half whiskey, half sweet and sour, and a cherry.

The only complicated part is figuring out how much you need, and how complicated you want your sweet and sour to be.

4 Steps to Prep the Whiskey

All our recipes have been tweaked for tailgate parties – in short, they’re for making whiskey sours in bulk, or in a punch bowl.

Making each yourself is a bad idea unless you just want to spend all your time bartending.

Your first step is getting the whiskey itself.

1. Grab a Medium to High-Quality Whiskey, as Large a Bottle as Possible

Generally speaking, the larger the bottle, the cheaper the price per ounce. Bulk stores like Costco often have attached liquor stores that sell truly gigantic bottles at an excellent price.

Every state has different leftover prohibition laws, so make sure you’re aware of when you can and cannot buy liquor (in Texas, for example, you cannot buy on Sundays).

You don’t want to be prepping everything the night before and suddenly find that you can’t purchase your main ingredient.

It’s tempting to get the cheap stuff, just because you can get so much of it.

Bad whiskey, though, still makes bad whiskey sours, no matter how good your sweetener mix is.

Jim Beam or Makers Mark are safe bets. Jack Daniels works as well, but not everyone prefers the sweeter taste, so consider getting two kinds if you’re getting Jack. Crown and Seagrams 7 are common as well.

To be safe, get two different brands.

2. Get Some Uniform Disposable Cups

This is the most important rule of all, no joke.

It’s very easy to get drunk on whiskey sours, and you’re going to need an easy way to keep track of how much alcohol your guests have had. If everyone has different sized glasses or is using their own, this will be impossible.

Buy one kind of cup, and know in advance how many ounces it holds. That will be important for a rule we’ll explain shortly.

No whiskey sour is complete without a cherry on top.

4. Make Sure to Prep Your Sweet and Sour the Night Before

Most of the work in making bulk whiskey sours are in the sweet and sour, so we’re going to spend a separate section on it.

All you need to know now is this: keep your mix in a pitcher or empty milk jug, without alcohol, until the next morning. Have a few extra ones on hand, so that you can mark which pitchers/jugs contain alcohol.

3 Steps to Prep the Sweet and Sour

Now, that you’ve bought the whiskey, bought the cups, and corralled up the milk jugs, it’s time to make your sweetener.

Bars use something called ‘sweet and sour,’ which is little more than citrus juice, water, and sugar. Any grocery store will sell generic versions of this, either in bottles or in powdered form.

You’re better off making it yourself. The recipe is easy – water, simple syrup, and citrus.

1. Cook Up a Simple Syrup

Simple syrup is nothing more than sugar water, in a 1 to 1 ratio. You won’t need a lot – one whiskey sour will require less than 2 ounces of simple syrup, so assume that one cup of sugar and one cup of water will serve eight people (once you add the whiskey, of course).

Boil the water, add the sugar, and make sure everything is dissolved. You’re done.

If you’re pressed for time, a delicious grocery store option is agave nectar. It’s a common substitute for simple syrup in restaurants across the country.

The most common sweet and sour recipes call for both lemon and lime juice. You can get the juice in bulk at any grocery store, but remember that you need juice with no sugar added.

You’re already adding the sugar with simple syrup or agave.

Use either a 1 to 1 or a 2 to 1 ratio, lemon to lime. Never use more lime juice than lemon juice.

One other thing – Rose’s Lime is a common bar product, but it is not straight lime juice, and not what you need.

A splash of orange or cranberry juice is a great way to spruce up the traditional citrus flavor of sweet and sour. You won’t need much, especially for cranberry – a little goes a long way.

Consider making two or three separate batches of sweet and sour, each with a different additional citrus.

It’s a simple way to add variety to an easy recipe.

Any good liquor store will sell tiny bottles of something called Angostura bitters. It’s basically an alcoholic beverage seasoning, but the alcohol is meant to draw out the flavors, not get you drunk.

Keep this on hand as an easy add-on to a drink, but do not pre-mix it in.

If you’re making your whiskey sours in a punch bowl, you can’t neglect club soda. The carbonation is refreshing, and the best combination for a hot day. Two cans should do it.

This isn’t an exact science, either, so don’t fret about exact measurements.

If anything, pour all of your lemon juice in a pitcher, fill the container up halfway with water, then pour, and then repeat for simple syrup and lime juice. 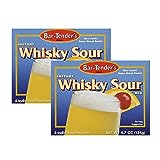 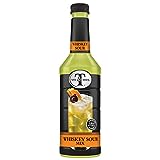 When it’s time to serve, you’ll have several jugs or pitchers of sweet and sour, a few more empty jugs or a punch bowl, and one or two large bottles of whiskey.

All you need now is a recipe – and it’s half and half.

Fill the bowl or jug halfway with whiskey, and fill the rest with your sweet and sour. If you’re using a punch bowl, add club soda. There’s nothing to it.

If you’re using pitchers or jugs, make sure whatever jug contains alcohol is clearly marked.

Set out your bitters, cherries, and ice. Top off each whiskey sour with a cherry. You’re done!

You now have a simple, unique, and tasty drink for your guests.

One Last Thing: Be Safe

If you’re using 4-ounce plastic cups for whiskey sours, and you’ve made sure each pitcher or punch bowl is exactly half whiskey, then each drink your guests consume will be in their system for an hour and a half.

And while it’s no fun to keep track of who is drinking what, it’s also easy to drink too many whiskey sours without realizing it.

A half and half ratio of whiskey and sweet and sour means that a 4-ounce cup will contain 2 ounces of whiskey.

Five in a row, without eating, means that your guest won’t be completely sober for 8 hours.

Make sure guests have a ride home, or aren’t drinking too much too fast.

Nothing ruins a good afternoon like a DUI or an accident.

In moderation, however, a few pitchers or punch bowl of whiskey sour is a fine addition to an afternoon of greeting, grilling, and gaming.

Toast your friends, and your team, and don’t forget to be safe.